ISO 9001:2015 Legal Requirements - Why it's critical to drop manual approaches Jul 28, 2017
What is a Legal Register? Jan 13, 2017
Work in the time of Coronavirus - Learnings from 4 years being remote Mar 18, 2020
Why is Having Accurately Up to Date Legislation Important? Jan 20, 2017
COVID-19 Regulation Updates Mar 20, 2020
Categories | Subscribe | Populars
Welcome to Libryo’s Sky high thinkers blog, where thoughts on legaltech, sustainability, law, compliance and technology converge. Filter by topic or popular reads and share your thoughts with us and others. If you have a topic that you’d like to see covered, drop us an email: info@libryo.com

Stay in the know by receiving monthly email updates directly into your inbox.

The United Nations recently reported that on 11 May 2019 approximately 180 governments made three key decisions to help protect the health of the environment and humans from the harmful effects of hazardous chemicals and waste.

Plastic waste is one of the world’s most pressing environmental problems. The United Nations estimates around 100 million tonnes of plastic is now found in the oceans, 80-90% of which comes from land-based sources.

The Basel Convention on the Control of Transboundary Movements of Hazardous Wastes and Their Disposal is an international treaty which aims to:

On 11 May 2019, plastic waste was included as a waste that is now subject to regulation by the Basel Convention.

To support and assist in implementing this ground-breaking agreement, a new Partnership on Plastic Waste was established to mobilise resources and expertise around the globe.

The Stockholm Convention on Persistent Organic Pollutants is an international treaty which aims to restrict or eliminate persistent organic pollutants.

On 11 May 2019, two toxic chemical groups Dicofol and Perfluorooctanoic Acid were included in the Annex A list of chemicals to be eliminated from production and use.

These two groups of chemicals add up to around 4,000 chemicals.

Perfluorooctanoic Acid can be found in various domestic and industrial uses such as non-stick cookware, food processing equipment, food packaging and as a surfactant in textiles, carpets, paper, paints and fire-fighting foams.

Dicofol is used as a miticide on a variety of field crops, fruits, vegetables, ornamentals, tea and coffee.

The Rotterdam Convention is treaty which seeks manage the import of hazardous chemicals in an environmentally sound manner. It calls on exporters to:

Signatories to the convention may also ban the import of listed chemicals.

On 11 May 2019, the pesticide phorate and industrial chemical hexabromocyclododecane were added to the Annex III list of chemicals which are subject to the Prior Informed Consent Procedure.

As such signatory countries decide on the future imports of these chemicals.

What does this mean for you and your business? 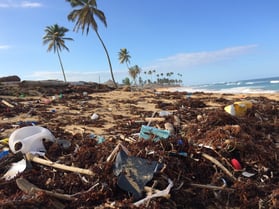 Changes to the national legislation of such signatory countries can be expected in the near future as governments amend their legislation in line with the agreements outlined above.

Such legislative changes can have far reaching consequences for your business. It is therefore vital to keep well informed so that you can prepare and align your business operations accordingly.

How Libryo can help keep you up-to-date with these changes?

Keeping abreast of such legislative changes can be an administrative and time-consuming burden. Libryo’s solution does this for you. Through our cutting-edge legal technology, organisations globally are empowered to know, for sure, at any given point in time, what they are required to do by law, in order to operate legally and sustainably.

Libryo’s legal registers are always up-to-date on the platform, notifying you whenever your applicable legal regulations change. With Libryo, you can rest assured you'll be on the front foot and in the know.

To keep on top of legislation changes and updates, find out more about the Libryo solution.

We'd love to know what you thought about this post.

You can’t put a price on compliance

Pandemics, financial crisis, protests against racism and violence, the climate emergency - 2020 can be characterized by ...

Law: An essential part of recovering from a pandemic

Nothing will test the robustness of an organisation quite like a global pandemic. While most might assume that SMB’s a...

Updates delivered to your inbox.

Get your monthly recap of Libryo's best articles!